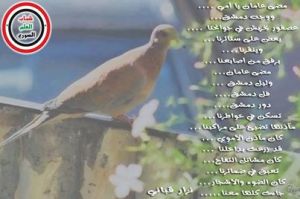 تقرير من مصر قبل محاكمة مرسي Reporting from Cairo
Azza Sedky Posted November 2/11/ 2013
I led a fraught-with-anger discussion on Twitter today. As usual, western journalists in Egypt were being critical about one thing or another. Though usually many sides to any story exist, these journalists managed to focus on the negative and slant facts damagingly. Since June 30th, many stories reported by western media have either sided with the Muslim Brotherhood or reported on the adverse actions taken by the police force and the interim leaders. The focus is clear: to pitch stories against the current regime and to present to the world a dooming picture of Egypte. Reporting from and about Egypt has taken a dark ominous turn.

The reason for this approach is neither clear nor understood. But let’s give the journalists the benefit of the doubt. Western reporters still don’t get how Egyptians could overthrow a legitimate president. A president is there to serve his term. Anything else is against what they, and the West, perceive as due legitimacy.

Unless that president errs, as, say, in the case of Bill Clinton. Then a country has the right to impeach and, possibly, remove the president from office, right? In Morsi’s case, his Muslim-Brotherhood-padded government and his dismissal of judiciary authority altogether meant he could not have been impeached—ever. And he would not have stepped down either, as in the case of Richard Nixon. Nothing, even the total destruction of Egypt, would have gotten Morsi to loosen his grip on power.

Western media’s inability to see Morsi’s ousting as a right manifests in their reading of the interim government’s conduct. So I decided to “listen in,” more carefully, on western media’s reporting from and about Egypt.

Today, one surfacing story was about journalists being captured and detained. Aron T Rose, a journalist in Cairo, says, “Been taken by police into an office. Made to format my memory card. Have my press card. Not letting me leave.” However, moments later he tweets, which presumably means he wasn’t detained for long, but his original tweet reverberates in cyber space as a police indiscretion.

In all fairness, Rose was at El Azhar University riots and presented, in photos, the destruction that students caused. The scene was quite decrepit as students of Muslim Brotherhood allegiance destroyed the facades and the interiors of buildings. However, Reuters’ leading paragraph on the story read, “Egyptian police fired teargas at protesting students at Cairo’s al-Azhar university on Wednesday hours after authorities announced the detention of Muslim Brotherhood leader Essam El-Erian, part of a crackdown against the Islamist movement.”http://reut.rs/1gbZ84Y Ed Webb, Middle East specialist, shortened it to “Egyptian police fired teargas at Azhar students,” ignoring why they were teargased in the first place. In case you wanted to know why the police force teargased the students, have a look at these photographs that Rose and others tweeted from El Azhar University.

David K. Kirkpatrick of the NY Times, in his article, “Ousted General in Egypt Is Back, as Islamists’ Foe” discusses one of the generals that Morsi fired in disgrace for corruption allegations. According to Kirkpatrick, General Tohamy’s return to power “signals a restoration of the old order after the military takeover.” The story concludes that the ousted general’s disgraced past was ignored when El Sissi brought him back to power to annihilate the Muslim Brotherhood.

Kirkpatrick then retweets, “Ousted General in Egypt Is Back, as Islamists’ Foe ‪http://nyti.ms/16KxvaA Will new authoritarianism bring back the old impunity, corruption?” Many western journalists, then, retweet, if not endorse. Erin Cunningham tweets, “Most absolutely unreformed Mubarak-era general rehabilitated as general intelligence chief. Wheeeee!” And Lauren E. Bohn goes further, “”Now the general’s back+more powerful than ever” ‪@ddknyt on Mubarak-era gen now leading crckdown on Islamists.” And Joshua Hersh says, “Fascinating story abt patronage, corruption and return to the old military order in Egypt by ‪@ddknyt.”

The story makes Morsi a redeemer of rights. The story though ignores Morsi’s firing spree. Didn’t he fire Tantawi and his affiliates who had a hand in Morsi’s rise to power? Didn’t he fire Major General Mourad Mowafy, whom Egyptians think very highly of? Did he not retire 600 major generals from the police force and in the process shrink the role of state security? If fair is fair, why isn’t the report referencing Morsi’s “ethical standards,” which definitely were not the steering force in the ousting of the disgraced general or anyone else. http://bit.ly/19x7SxY Neutrality and non-partisan reporting fall by the wayside if the picture portrayed isn’t complete and objective.

Here is another take on the same story: “The Real Story Behind the Egyptian Generals’ Crackdown on the Brotherhood” http://www.nationalreview.com/node/362597/print. This one compares Mubarak, “who played footsie with the MB,” to the generals out to get the Muslim Brotherhood. “They are acting against the MB in every way they can: shooting demonstrators, jailing leaders, seizing MB funds, and outlawing the organization and its activities.” What the story does not report is why the generals are after the MB.

How would the reporter want Egypt to deal with terror? I’m also not clear as to how similar terror would be dealt with in the US, which most of these reporters call home. Will the White House pat the terrorists on the back and tell them they are lawful citizens that deserve full rights? Or will the US call on its most efficient men to deal with terror?

The article goes on to say “Even if support for the MB has fallen now to perhaps only 25 percent or 15 percent of all Egyptians, that’s a substantial bloc.” 25% of Egyptians translates to around 23 million Egyptians, an exaggerated number by any standard leaving the reader under a false impression that the MB members are by far more in numbers than they truly are.

Then comes western media’s misunderstanding of how Egyptians have come to perceive Major General Abdel Fattah El Sissi. The phrase “Sissi mania” has been passed around with irony and disdain. They find the respect, and exaggerated adulation, erroneous and undemocratic. They believe that Egyptians have removed Morsi to have him replaced by another dictatorial regime.

Again I beg to differ. A dictator doesn’t have the nation behind him and pleading with him to become its president. If Egyptians want to believe that El Sissi is their saviour, they have every right to do so. In modern history, Egyptians have not shown their appreciation of anyone as they have for El Sissi. Again, it is their call.

What western media doesn’t see is that El Sissi has done exactly what Egyptians wanted him to do: save Egypt from Morsi’s tyranny, and, hence, the esteem and respect. Is it a mania? Maybe, but it’s up to Egyptians, not the western world, to decide what they want and care for. And yet, if El Sissi errs, they will curse him the same way they cursed Morsi and Mubarak before him.

This is a day’s reporting by western media on Egypt, mostly from Egypt, and to Egypt and the world. Although authorities know that western reporting remains biased, these journalists have not been censored or denied access to scenes of disruption and chaos.

Maybe the day will come when these reporters get bored of Egypt and head to other spots where they will find more contentious issues to find fault with.
http://www.wespeaknews.com/world/reporting-from-cairo-261090.html
درب حلب ودرب الشام مشيتو