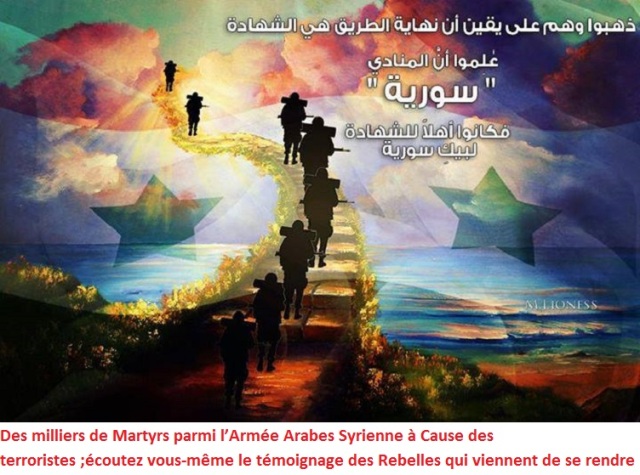 The disillusioned militants of FSA are surrendering to take advantage of the amnesty offered by the Syrian government. ITV reports:

« They emerged from the shadows of a rubble-strewn street, hands raised and stripped to the waist to ensure they weren’t wearing suicide vests. But this wasn’t a trap or a staged piece of propaganda. These were defectors from the Free Syrian Army (FSA) who had been besieged for more than a year and had had enough.

We happened to be in the area as the defection was being orchestrated. It took several hours of negotiation to be allowed to film the moment the fighters lay down their weapons in the silent alley.

The Syrian National Forces were nervous about us filming such a sensitive operation and insisted we blurred the faces of the soldiers involved.

The men had been convinced to make the perilous journey across sniper-scrutinised streets over several days by another defector, 33-year-old Mamoun al-Khateeb. He had become steadily disillusioned by the increasing presence and influence of Islamist forces on the rebel front lines.

We were given hundreds of photos of Khateeb and his former comrades in arms — showing them posing with weapons and the black and green flags associated with Islamist groups like the Al Nusra Front.

They give an astonishing insight into the hidden world of the Islamist rebels a few blocks away from where we had been filming. Some showed the men prone at sandbag defences, assault rifles in hand. Others gave clues about how the men are living in the warzone, relaxing with a shisha-pipe, even cooling off in a half-filled swimming pool of a villa.

Khateeb said numerous foreign fighters had joined the rebels in the area where he had been fighting. Saudis, Libyans, even German Muslims had flooded to this suburb in recent months. He claimed more than 70 per cent of the rebel gunmen in the suburb were Islamist in their ideology.

He described the streets as a lawless jungle where competing factions fight each other for food, weapons and territory. Before the war he had worked in his family’s shop – a business that had been looted by the al-Nusra Front. He said the weapons supplied to the rebels were smuggled in through Jordan, paid for by Saudi Arabia and Qatar.

Officially, the government has offered an amnesty to FSA rebels if they surrender now, but the Islamist fighters are unlikely to enjoy such freedom. »
Source: ITV