Damascus, (SANA) Presidential Political and Media Advisor Dr. Bouthaina Shaaban said that al-Quds and Golan are the eyes of the Arab Nation and it is the duty of all to defend them, adding « clinging to the land and sacrificing for it is the only choice for us. »
Shaaban pointed out Sunday during the inauguration of « From Golan to al-Quds » forum marking 38th anniversary of the Land Day, which was held by Al-Quds International Foundation in Damascus-based al-Sham Hotel with the participation of a number of researchers and thinkers, that those who defend al-Quds and Golan from any Arab country are actually defending themselves, their Arabism, religion and future, considering that « no-one has a favor in that as we are all targeted…and did not we believe in that, they would occupy our lands piece after piece. »
She pointed out that everybody sees how and why Syria is being targeted, « So we move back to the same equation which is clinging to the land, the principle and the value of sacrifice. »
« All those who launch assault on Syria will be repelled…hundreds of invaders had come to this land throughout thousands of years, but they were repelled and we have remained here because we believe in our land, » Shaaban added. 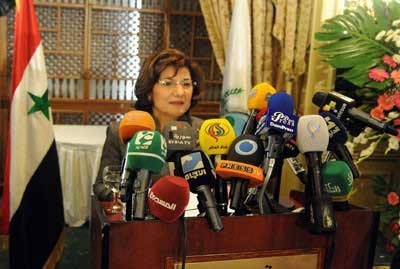 Presidential Political and Media Advisor clarified that the war waged on Syria is not of a sectarian nature but rather it is a war launched for controlling our land , pointing out that Israel set schemes for a hundred years in advance, and the sole response to that is represented through adhering to the land, the principles and the value of sacrifice.
« We should comprehend the principle of the land deeply and comprehensively because it is a basic condition for our existence, and if we take a panoramic view of the human history we could see that the entire conflicts revolve on the lands, » she elaborated.
« The Palestinians were not mistaken when they considered that their presence in the land is the only right and genuine existence, » Shaaban said.
She lauded the adherence of the Arabs and Syrians to the occupied Golan, reminding of what the late President Hafez al-Assad said « We will not give up a grain of soil of Golan. »
Shaaban stressed that the Arab-Zionist conflict is the compass of all what is going on in the Arab land, clarifying « We will not master analysis without realizing that the Palestinian issue is the Arabs’ central issue, and targeting the Palestinians is the first step for attacking all the Arabs. »
Assistant Secretary General of the Popular Front for the Liberation of Palestine-General Command Talal Naji said the reason behind the conspiring against the Syrian people is their adherence to the Palestinian Cause and belief in the liberation of the occupied Palestinian territories.
“The West wants the Arab leaders and countries to be in cahoots with them to liquidate the national rights of the Palestinian people,” he added.
He addressed the Syrian people by saying “We will always be with you until we liberate the occupied territories in Palestine, Syria, Lebanon and each and every Arab land.”
“Land Day is the day of belonging to the genuine Arab national identity,” said Director General of al-Quds International Foundation Safir al-Jarad.
He highlighted the significance and symbolism of Golan and Palestine and the unity of their course of struggle in confronting the Israeli ambitions. http://sana.sy/eng/21/2014/03/30/536124.htm