The possible 2016 presidential contender was discussing the escalating crisis in Iraq on camera with CNN host Candy Crowley over the weekend when he condemned the notion that the American military should intervene further.

According to the junior senator, other recent uprisings in the region that prompted a militarized response from the US only made matters worse and further fueled terrorist activities.

“We went into Libya and we got rid of that terrible Gadhafi. Now it is a jihadist wonderland over there,” Sen. Paul said. “There’s jihadists everywhere.”

The senator’s comments mirror similar remarks made by his father — former congressman Ron Paul — only weeks earlier this month.

In a video statement posted to the Ron Paul Channel website earlier this month, the former US representative for Texas claimed that Al-Qaeda was only made stronger after the US increased its military operations in the Middle East following the 2004 invasion of Iraq.

“But the real irony here is that Iraq had no Al-Qaeda in it when we went into Iraq, because right after 9/11 a story was concocted and based on lies and misinformation that Al-Qaeda was in Iraq, that there was weapons of mass destruction — all those things that motivated the people and the propaganda to get the support, and Congress went along with it and started spending all that money,” Ron Paul said.

“Not only did they pick up a lot of weapons and guns and equipment, but they end up getting Black Hawk helicopters. And this is money that the taxpayers paid and we gave it to the Iraqis. They were supposed to be trained in taking care of and protecting their country, and here the Al-Qaeda is taking over the country,” he added.

Similarly, his son said over the weekend to CNN that this activity created “wonderlands” that are now posing immense threats to American.

« We are where we are because we armed the Syrian rebels. We have been fighting alongside Al-Qaeda, » Sen. Paul said to CNN.

As matters escalate, he added, Americans need to assess the possibility of whether US troops should once again be sent overseas to fight in another nation’s war.

“Obviously, we have the military might and power. But the country as a whole has to decide, do we want to send 100,000 troops in? Are we willing to have 4,500 young Americans die to save a city like Mosul that the Shiites won’t even save, that they have fled? » He asked.

During the last week, US Pres. Barack Obama has announced the deployment of 250 troops to Iraq to be followed by upwards of 300 military advisors. According to the results of a New York Times/CBS Poll released this week, 29 percent of Americans say the president should do more and 22 percent would rather he do less. 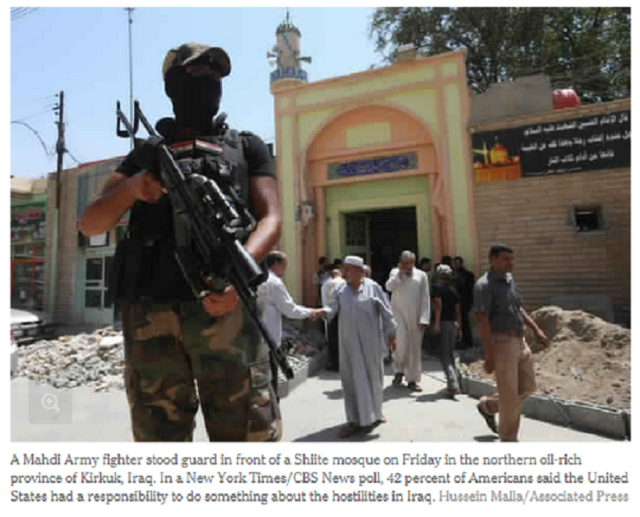 Poll Shows No Consensus in U.S. for Helping in Iraq
JUNE 23, 2014
The American public is divided over whether the United States is obliged to deal with the sectarian violence in Iraq and whether the troubles there are increasing the threat of terrorism domestically. The latest New York Times/CBS News poll also found that while many see President Obama’s actions as appropriate, there are large partisan differences.
On Thursday, Mr. Obama announced the deployment of about 300 military advisers to Iraq to help fend off attacks from the Islamic State in Iraq and Syria, the militant group that has overrun large parts of the country. Forty-one percent of the public said Mr. Obama was properly addressing the violence in Iraq, while 29 percent said he should do more and 22 percent preferred he do less.
As usual when discussing views about Mr. Obama, opinions varied widely by party identification. Most Republicans (53 percent) would rather see him do more to tackle the problem in Iraq, and 19 percent said he was doing the right amount. However, 63 percent of Democrats said he had done enough, and only 13 percent said he should be doing more.
Of those who said Mr. Obama should be doing more in Iraq, about three-quarters said the United States had a duty to take steps to deal with the crisis there.
Over all, 42 percent said the United States had a responsibility to do something about the hostilities in Iraq, and 50 percent said it did not.
Among Republicans, 52 percent said the United States had an obligation to help deal with the conflict, while 51 percent of Democrats and 56 percent of independents disagreed. Respondents who served in Iraq or Afghanistan or their immediate family members were also less inclined to say the United States had a responsibility to help out in the conflict.
Differing attitudes could stem from differences in opinion about the threat that ISIS poses to the United States. Of those who said Mr. Obama should be doing more in Iraq, nearly two-thirds said the terrorism threat to the United States would grow as a result of the recent hostilities there.
Over all, 44 percent of the public said the possibility of terrorism in the United States would increase as a result of the unrest in Iraq, and 50 percent said it would have no effect. Sixty percent of Republicans said the risk to the United States from terrorism would rise as a result of the situation in Iraq, while 57 percent of Democrats and 55 percent of independents considered the danger to be unchanged.
The nationwide telephone poll was conducted June 20 to June 22 with 1,009 adults and has a margin of sampling error of plus or minus 3 percentage points. More results from this survey will be available at nytimes.com this evening after 6:30.
The Upshot provides news, analysis and graphics about politics, policy and everyday life. Follow us on Facebook and