Sharif as-Safouri, abducted by Al-Nusra Front in July, confesses to receiving antitank weapons in return for protecting the border

Free Syrian Army commander, arrested last month by the Islamist militia Al-Nusra Front, told his captors he collaborated with Israel in return for medical and military support, in a video released this week.

In a video uploaded to YouTube Monday by the Executive Sharia Council in the eastern Daraa Region, an Islamic court established by Al-Nusra in southern Syria, Sharif As-Safouri, the commander of the Free Syrian Army’s Al-Haramein Battalion, admitted to having entered Israel five times to meet with Israeli officers who later provided him with Soviet anti-tank weapons and light arms. Safouri was abducted by the al-Qaeda-affiliated Al-Nusra Front in the Quneitra area, near the Israeli border, on July 22.

“The [opposition] factions would receive support and send the injured in [to Israel] on condition that the Israeli fence area is secured. No person was allowed to come near the fence without prior coordination with Israel authorities,” Safouri said in the video.

Israel has never admitted to arming moderate Syrian rebels, who have been engaged in battle against the Assad regime and its allies since March 2011. In June, Brig. Gen. Itai Brun, head of Military Intelligence research, told the Herzliya Conference that 80 percent of Syria’s oppositionists are Islamists of various shades, indicating that Israel was reluctant to collaborate with them. 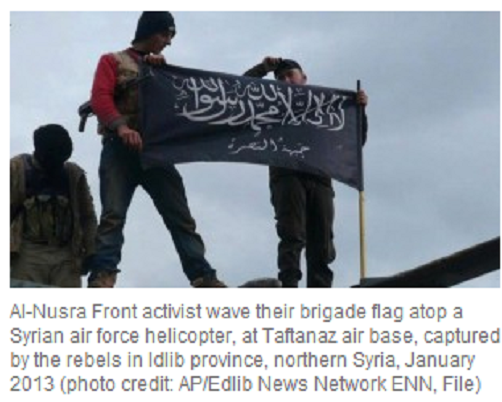 Thousands of al-Qaeda-linked rebels reached southern Syria over the past month, fleeing the Islamic State which had captured large swaths of land in northern and northeastern Syria. While Al-Nusra and the Free Syrian Army have collaborated in the battlefield against the Assad regime, friction has intensified as the Islamists began to implement their stringent version of Islam in the area, establishing local Sharia courts.

In the edited confession video, in which Safouri seems physically unharmed, he says that at first he met with an Israeli officer named Ashraf at the border and was given an Israeli cellular phone. He later met with another officer named Younis and with the two men’s commander, Abu Daoud. In total, Safouri said he entered Israel five times for meetings that took place in Tiberias.

Following the meetings, Israel began providing Safouri and his men with “basic medical support and clothes” as well as weapons, which included 30 Russian [rifles], 10 RPG launchers with 47 rockets, and 48,000 5.56 millimeter bullets.

While opposition websites denied that Safouri was a collaborator, claiming his entries into Israel were for medical purposes alone, regime media celebrated Safouri’s confession as proof of the Free Syrian Army’s treachery. On August 1, dozens of demonstrators took to the streets of the village of Hayt, Safouri’s hometown near Syria’s borders with Jordan and Israel, to protest his abduction, condemning Al-Nusra Front for the act.

No Israeli comment was available at time of publication.