President Obama admits that ISIS is not a JV team

President Obama admits that ISIS is not a JV team

In an exclusive interview with Chuck Todd on NBC’s “Meet the Press” Sunday, President Obama admitted that ISIS is not in fact, as he intimated in an interview with the New Yorker in January, a JV team.
“The analogy we use here sometimes, and I think is accurate, is if a JV team puts on Lakers uniforms, that doesn’t make them Kobe Bryant,” Obama had told the magazine.

When Todd asked if that description was evidence of “bad intelligence or [Obama’s] misjudgment,” the president said that he wasn’t “specifically” talking about ISIS.

“What I said was, not every regional terrorist organization is automatically a threat to us that would call for a major offensive,” explained Obama. “But what is absolutely clear in ISIL, which started as al-Qaeda in Iraq and arose out of the U.S. invasion there and was contained because of the enormous efforts of our troops there then shifted to Syria, has metastasized, has grown.”

“They’re not a JV team,” Todd followed up, prompting the president’s agreement.

“Well, they’re not a JV team,” said Obama. “But keep in mind that we anticipated some of these problems in the speech that I gave at West Point you know, several months ago, where I specifically said, our goal should not be to think that we can occupy every country where there’s a terrorist organization.”

Despite the frightening videos of ISIS beheading two American journalists and verbally threatening the United States, Obama assured the American people that his administration has not seen “any immediate intelligence about threats to the homeland from ISIL.”

Obama plans to announce his strategy to combat ISIS Wednesday, and in a rare move, he told the “Meet the Press” host that he will be asking Congress to weigh in on his plan.

“I’m confident that I have the authorization that I need to protect the American people,” he said. “And I’m always going to do what’s necessary to protect the American people. But I do think it’s important for Congress to understand what the plan is, to have buy in, to debate it.”
Departing from his usual insistence that Washington — and Congress in particular — isn’t working, Obama admitted that he has been “consulting with Congress throughout” to understand and make decisions about the terrorist presence in Iraq and Syria.

Obama also made clear that he is not considering “sending in 100,000 American troops” to the Middle East. 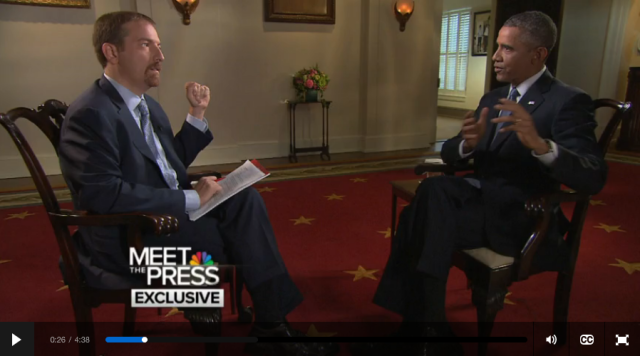 Obama to Chuck: ISIS Not a JV Team