How did Islamists receive American weapons? See the evidence from guided missile that exploded near Syrian front line 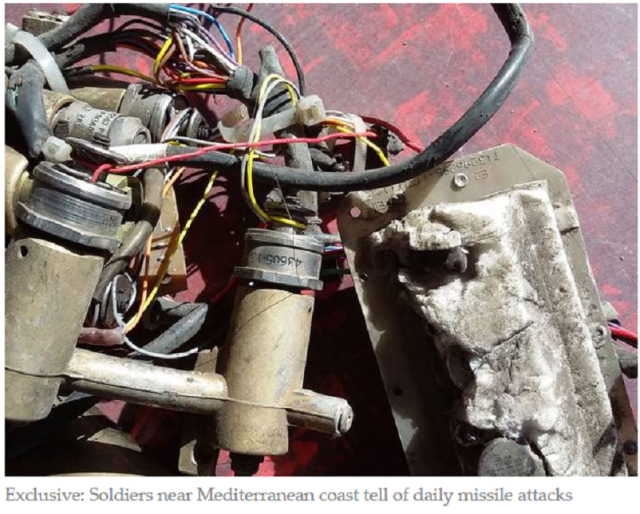 How did Islamists receive American weapons? See the evidence from guided missile that exploded near Syrian front line

Syria’s special forces troops are strung out across a pinnacle of hills here just north east of Lattakia on one of the country’s most dangerous front lines, under daily missile attack from reinforced rebel forces now supported by Isis.

The officers, all of whom are paratroopers, speak of new tactics and upgraded weapons used against them since Isis seized the Iraqi city of Mosul – and some of the radio traffic they listen to from their enemy is in the Chechen or Georgian languages.

Intelligence reports speak of a unification of various rebel factions calling themselves the “Legion of the Coast”, a clear sign that the Isis-inspired rebels – including Isis supporters themselves – intend to strike westwards towards the Mediterranean, scarcely eight miles away.

It’s fair bet that a big battle is shaping up in these pine-covered mountains.

The soldiers themselves talk of the thermal heat-seeking missiles fired at them with detailed knowledge, and agree that the mixture of Islamist groups above and to the east of them are carrying out daily probing attacks to test their defences.

Intriguingly, their surveillance patrols are returning at dawn to report the sound of unidentified night-time aircraft flying into Syrian airspace from Turkey and then east, deep into Syria. 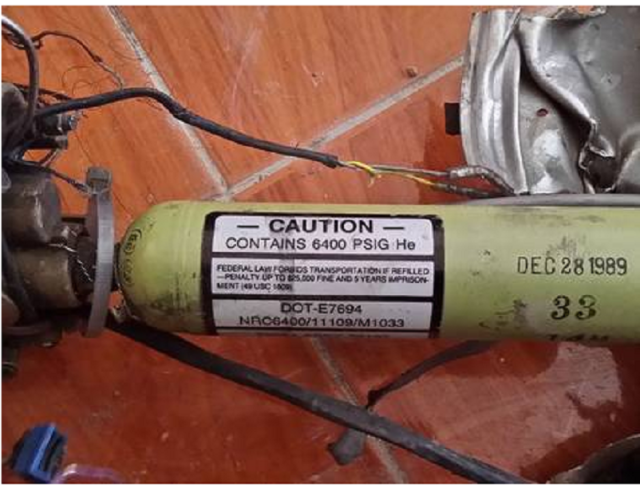 This began around 20 days ago. They do not know if the machines – drones or aircraft – are American and they have heard no airstrikes day or night. But their officers talk of the new TOW anti-armour weapons that have appeared in rebel hands.

One officer showed me an Islamist website videotape of rebels firing a heat-seeking rocket at his own encampment just to the north of here at Qastel Ma’af. The missile can be seen exploding but in fact disintegrated against concrete revetments around a tank.

But when a corporal dragged a sack load of missile parts into a room in this Syrian hill-top fortress, it contained some fascinating evidence of the rebel armoury. Most missiles fragment into thousands of pieces on detonation but just over a month ago – on 26 September – a guided missile exploded deep beneath sand and earth and the fragments clearly show the name of its American arms manufacturer, circuit boards and the coding of the weapon.

Part of the missile identifies the “Eagle-Piche IND (Indiana) INC.” company as the manufacturer and says, in English, that it is “helium charged”, adding – rather ironically as it turns out — the words: “CAUTION — CONTAINS 6400 PSIG He (high explosive), FEDERAL LAW FORBIDS TRANSPORATION IF REFILLED — PENALTY UP TO $25,000 AND FIVE YEARS IMPRISONMENT (49 USC 1809). The Syrians do not know how this weapon – which appears to have been manufactured as long ago as 1989 – made its way from the US to the hands of their country’s Islamist rebels – but it would not be difficult for the Americans to find out. Its full computer coding reads: DOT-E7694 NRC6400/11109/M1033 79294 ASSY 39317 MFR 54080. 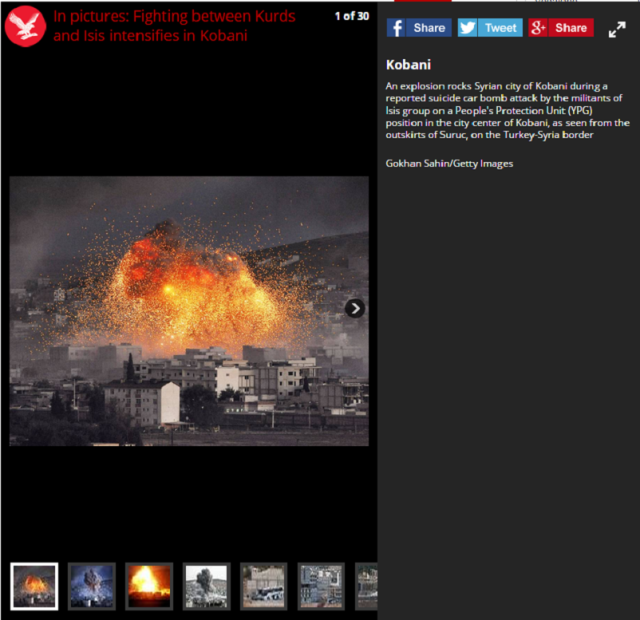 A battery tube from another missile fired on the fourth of last month carries an inscription indented in the metal: “132964 Battery thermal MFG DATE 12/90 LOT No (indecipherable numeral then 912 S/N 005959.”
These codes should make it easy for the Americans to identify the purchaser – or receiver – of the weapon, if they choose to do so.

How did the Islamists receive these American weapons? On the international arms market? Or from ‘moderate’ rebels who were given American weapons and then sold them to the highest bidder.

Evidence of just how dangerous these hilltop fortresses are – and they are perched amid countryside that resembles more the hills and valleys of Bosnia than the more familiar desert and rural countryside of Syria – came when a general received a radio call that a suicide bomber was moving towards his positions.
He immediately ordered all armed Syrian outposts to open fire on anyone suspiciously approaching their positions. He had good reason to do so, for just seven months ago many of his closest colleagues were annihilated by a rebel suicide bomber on the neighbouring hilltop of “Position 45” to the north of Qastal Ma’af.

By chance, I visited the very same post almost exactly a year ago and was introduced to the soldiers there by their commander, General Mohamed Maarouf. 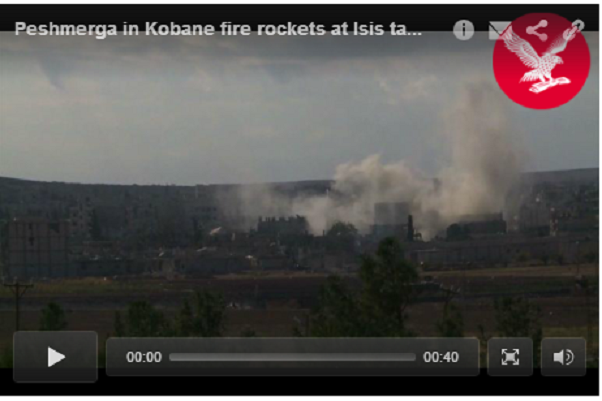 Last March, the bunkered post, surmounted by a broken communications tower, came under a ferocious siege by Islamist rebels led by Moslem al-Chichani, the notorious – or legendary, depending on your point of view – red-bearded Chechen leader who moves constantly around the battlefields of Syria and Iraq. Outnumbered, the Syrian soldiers held out for a full week – they were all special forces, like the men at Ash-Shaqraa – when General Maarouf called for an armoured personnel carrier to evacuate his wounded.

The armoured vehicle that emerged through the fog, however, was not the one the general had called for. Driven by a suicide bomber, it crashed into the centre of the compound with 15 tons of explosives aboard, detonating with a roar heard all the way to the Mediterranean, killing almost all the soldiers, including General Maarouf and tearing open a crater 30 feet wide and 15 feet deep.

Within hours, an Islamist video showed a laughing al-Chichani with other rebel colleagues, boasting of their victory. One officer said to me that “almost all the soldiers you met last November were martyred.”
Several Syrian officers believe that Chechens are sent to fight here because the land is similar to their native country. The airwaves are also filled with Turkmen voices, many of them Syrian Turkmens, some with other Turkish accents, usually calling for reinforcements or asking for more missiles or ammunition.

The Syrians know that their enemies can also listen in to their radios although they have more sophisticated ways of communicating to each other. Yet they suspect the Islamists may now be able to listen to land-line conversations. 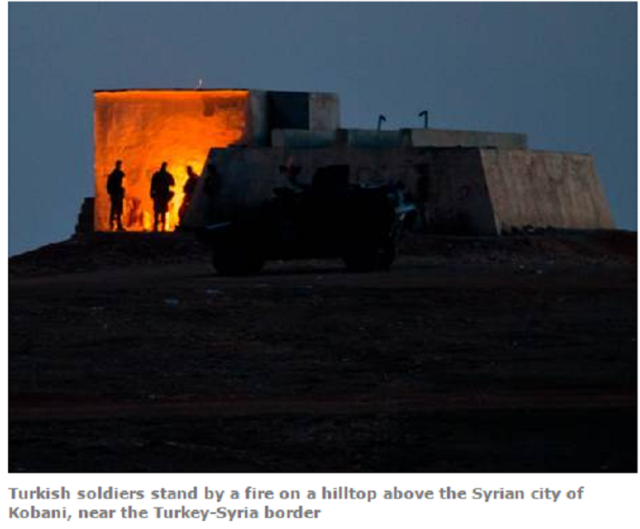 In the last year, more fighters from the Nusra Front and Jund el-Islam have turned up opposite the Syrian front lines – although ‘front line’ is perhaps a misleading expression. In many wooded areas, the area under ‘control’ by Syrian troops and rebels is only notional. As a Syrian officer said some months ago of a different battlefield, “the Syrian soldier controls what his feet are standing on” – a now well-known epithet that probably applies to many of the world’s wars.

In reality, the rebel posts are perhaps a mile and a half from Ash-Shaqraa but the two sides sometimes find themselves only 200 metres apart. Turkmens are used in the battles because of their local knowledge but the soldiers here have noticed that the “labels and brands” of the various Islamist groups are constantly changing. If ISIS is here as an organised structure, they say, it is still very small. But they have noticed the rebels now using armour-piercing missiles for the first time as well as missiles with a range of five kilomtres. Among Arabic accents on the radios are voices from Egypt, Libya, the Gulf, Tunis and Morocco. Smaller Islamist factions appear to swallow each other “like whales”, one soldier memorably said, adding that it was “only a matter of time before a big faction swallows all the smaller factions.” He did not use the Arabic word ‘Daesh’ — ISIS — but that must surely be what will happen. Some units belong to the “Liwa al-Adiyat” – the ‘Brigade of Great Ordeals’ — but whenever these men engage in fighting, units from other factions arrive to support them.

Syrian troops have also observed large numbers of Turkish troops and armour massing along the border to their north and the construction of a new concrete fortress by Turkish forces on top of Al Aqra mountain. To describe the situation here as ‘tense’ would be to fall victim to an old cliche. Suffice it to say that after giving me a pair of military binoculours to look into the forests, an officer asked me to return behind a sand revetment to avoid attracting sniper fire on their position. One of the late Ganeral Marrouf’s closest comrades was at Ash-Shaqraa on Sunday and he reminded me of the last conversation I had with his former commander. “He told you, Mr. Robert, that he would live to victory or be martyred – well, he kept his promise!”